The Johnston Clan: “The Johnstones were one of the many Border families who frequently raided the north of England over the centuries. James Johnstone, the chief of the clan, was made Lord Johnstone of Lochwood in 1633 by King Charles I and Earl of Hartfell in 1643. King Charles II elevated him to Earl of Annandale, and Lord Johnstone of Lochwood, Lochmaben, Moffatdale and Evandal. In 1701, a descendant was raised to the rank of Marquess of Annandale. This family supported the Jacobite cause in 1715 and 1745.” (*Outlander anyone? ;)* )

The Johnstons of Annandale were the most feared clans of the Borders of Scotland. As I studied, they were outstanding horsemen, wore steel helmets, reinforced leather jackets, carried a lengthy lance, a cutting sword and a set of pistols. Keeping it classy of course 😉

Two of our ancestors are extremely important to Scotland’s history, one of them being Robert the Bruce and the other, William Wallace. In roughly 1218, William Wallace gave the Lochmaben castle to Johnstone of Eskdale, who married Wallace’s niece.

Despite the spelling, in Scotland, the name is generally pronounced “Johnston” and native border Scots often pronounce it “Jawnson.” However, there is only one name, one clan, and one great history that I’m happy to be a part of 🙂

In reading, I found that the original war cry of Clan Johnston was “Light Thieves All,” which was “a demand to the enemy to dismount and surrender.” Later, this changed to their new motto, Nunquam Non Paratus, which means “Never Unprepared,” which I have this tattooed on my left foot. 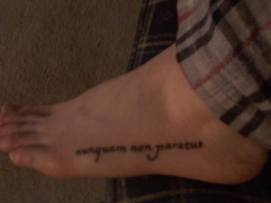 Looking up local poetry relating to the Johnston Clan, I discovered these stanzas, from two different poets, referring to their historic seat:

Where placid Annan peaceful flows
And laves its low-laid level vale,
The Lochwood’s lofty towers arose,
Where dwelt the Lords of Annandale,
On Johnstone Moor, midst wavering grass
The towering fortress frowned afar,
Surrounded by a deep morass,
A safe retreat in time of war.

The reverend oak takes back
The heart to elder days of holy awe,
Such oaks are they, the hoariest of their race,
Round Lochwood Tower, the Johnstone’s ancient family seat,
Bow’d down with age, and all o’er
With scurft moss and parasitic hair.

Sir Walter Scott often wrote of the Johnston Family, and in The Fair Maid of Perth, he writes, tongue-in-cheek:

Within the bounds of Anndale,
The gentle Johnstones ride,
They have been there a thousand years,
A thousand more they’ll ride.

Ironically, I will be going from one Scottish clan to the next, as my fiance is part of the Highland Clan, Clan Farquharson.

So why on Earth am I giving you this random information on a Weekly Photo Challenge?!

Well, I wanted to explain why I love Scotland so much. It’s not just the beautiful moors or highlands, but it’s also the history; my ancestor’s history. It is my favorite place to visit, and one that I have been fortunate enough to see at least once in my life. I would love to go back, and my fiance and I plan to do this when we have more money. It’ll be kind of a second honeymoon 🙂

These pictures sum up my love for Scotland wholeheartedly. If you ever get the chance to visit this majestic location and see it’s captivating scenery, you should go in a heartbeat. 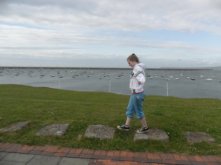 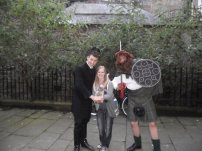 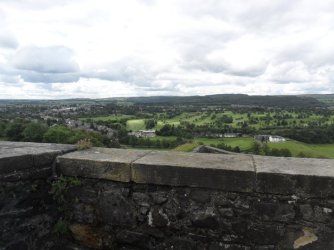 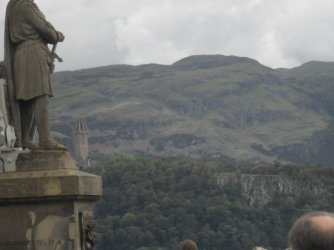 Link to other Weekly Photo Challenges

Follow Girl with the Paw Print Tattoo on WordPress.com